First of all, this was the first time I’d ever been to Estonia. And honestly, it was everything I could ask for. I’m a Latvian who lives literally next to Estonia. I still can remember the trip in detail, so I would like to share the story.
I’m a volunteer at World Wildlife Fund Latvia or Latvian for “Pasaules Dabas Fonds” – which is the Latvian equivalent of the name. It all started when I got an email about a chance to be a part of the trip which was to take place on Estonian islet called “Manija” and I immediately replied “I’m definitely in!”. Mostly, I’m not that spontaneous, but this and the last adventure I wrote about in “Instagram trip” prove that I can be quite spontaneous after all.

Not bad for the first time in Estonia.
Not bad at all.

The main goal of the event, which took place on an Estonian islet called Manija (Manilaid), was to increase the quality of informal learning for adults. It was effectively achieved with the help of practical environmental volunteering activities. At this particular event, we were asked to help improve the habitat of Natterjack toads (Latvian – smilšu krupis) ­- endangered species in Estonia. Among the project partners were various environmental specialists from Estonia, Latvia and Finland. Turned out I was the only volunteer from another country because everyone else was a specialist of some kind. I somehow managed to stand out. Again. But later I found out that I would have a chance to become a volunteer leader in Latvia and this trip is an opportunity to learn from Estonians.

All the participants of the project “Talkoot, talgud, talkas” (which was the official name of the trip) stayed in the camp for four days, during which we were hosted by Riida farm. They made us feel like home by giving us a cosy place to sleep and preparing meals for us three times a day. The food we ate during that time was home-grown by the farm owners.

This our camp from a distance

This is our camp up close 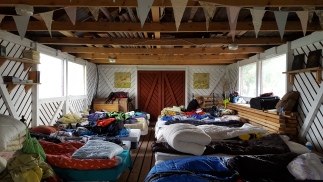 Inside of the camp where we slept

We gathered here for our meals and talks

You have probably been wondering if wi-fi was available on the islet, right? And as a matter of fact, indeed – it was. Wi-fi spot was near the couch and on some sort of a chair. I believe it was inside a small room behind the door because the wi-fi signal was really low and worked only near the couch. And honestly, I was more than fine with that. At that point I was just too excited about the nature, the project, the islet, Estonia itself and everything else, to be concerned about Facebook and whatnot.

I was enjoying myself photographing everything. When I saw a fold where sheep graze, I was tempted to ask someone in charge if I could go inside the fold and photograph. When I received permission, I immediately went back to the camp to put on my boots. It was necessary because it was muddy and wet inside the fold. The sight was uncanny as it was unusual to see sheep and cows near the rocky coast of the sea. I was careful not to disturb the peaceful animals.

The results were great – got some close up shots of the sheep and had even a chance to pet a calf of the wild cow. I was kind of scared to go too close to the cows and I kept at a distance at first. As I gradually started to feel more confident, I slowly moved towards the calf and I guess the calf was curious about my unusual presence and came towards me. Its parents seemed not to care. They didn’t move at all. They just stood there near the sea and barely even watched over the calf. So I took the chance to pet it and took some great shots with my free hand. I felt like an adventurous National Geographic cameraman.

There were a lot of spiders

Sheep on a rocky coast 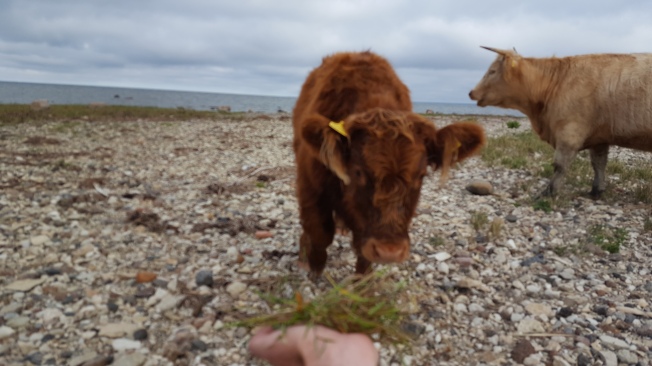 Natterjack toads are a little bit different to other toads out there. They move around by running like a little mouse and not jumping like other species usually do. In this way, they decrease the chance of being spotted by birds and other predators. They are usually seen in open areas at night for the same reason. We even made a short expedition in the first evening and successfully found two Natterjack toads. The population of Natterjack toads decreased because of the loss of habitat in the coastal meadows and sand dunes. Manilaid is one of the project targets because this species are still present there and improving their habitat would be worth the effort.

This one is quite small

This is as big as full-grown common frog

So, how did we actually improve their habitat? Generally, it is not an easy task because reed is thicker and harder than grass. We mainly used hand tools, but without power tools like grass trimmer, we wouldn’t have been able to clear all the work area. Luckily we managed to do all the mowing in one day. On the same day, we managed to pile the cut reed into stacks and leave them to dry out. The next day we could successfully get rid of the stacks by burning them down. This was necessary because this toad species likes open landscape and ponds which are exposed to the sun. It allows the temperature of the shallow water to rise up to the optimal condition. The area we worked on was the perfect habitat for the toads. 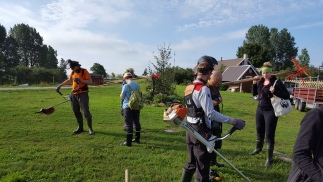 Getting ready for the first day 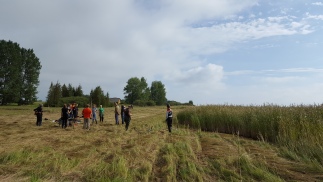 Working on the cutting

And the last bit of reed!

Stacking up them into piles

It was a really great experience. It’s amazing how they managed to adapt there. There is one main road through the whole islet where on the both sides you can find few houses. All the houses are built on a highest possible hillock because once every 100 years the islet is flooded by the storm.

Few houses even had a solar panels 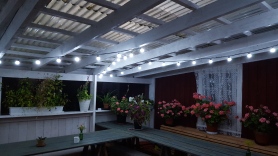 Especially beautiful it was at the evening

At the local museum 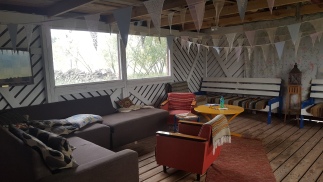 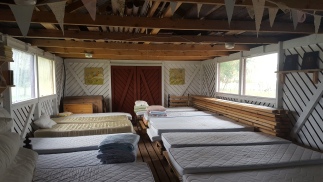 It was sad to realize – I have to go home

On the way back to the land

Thanks to Karolina for editing

All photos are taken by me

This site uses Akismet to reduce spam. Learn how your comment data is processed.